During Azure certification preparation and based on my project experience of the Azure Kubernetes Service (AKS), I wish to share several best practices for AKS deployment. In this post, I will walk you through the selection of appropriate options within AKS.

Kubenet networking - Azure manages the virtual network resources as the cluster is deployed and uses the kubenet Kubernetes plugin. Pods receive IP address from logically different address space to the Azure virtual network subnet of nodes. Then Network address translation (NAT) is configured for pods to reach resources in Azure virtual network. This is more of a complicated introducing management overhead.

When you use Azure CNI networking, the virtual network resource will be created in a separate resource group to the AKS cluster. The resource group will be given a default name, however, you can set the name when deploying via ARM templates.

While selecting the CNI networking model, you must be cautious with respect to IP address management. If you exhaust all IP addresses in the target subnet you will need to redeploy the cluster to a new larger subnet as you cannot resize a subnet in Azure once resources are deployed to it. With CNI each pod will be assigned an IP address from the subnet, so you need to have some foresight into the number of nodes and pods that will be deployed to the cluster.

For example, if you select 3 nodes during AKS cluster creation using the CNI network model. Azure will expect to be able to allocate 90 IP addresses from the subnet for the maximum number of pods deployable. The reason is, the default number of pods per node is 30. So, 3 nodes * 30 pods per node equals 90 IP addresses allocated. The calculation is (N * Max pods for node). In addition, AKS requires 3 IP addresses per node and kube-api requires 1 IP address, all allocated from the same subnet. The preferred subnet space for AKS is /24.

Application gateway can be configured with ingress controller or Azure load balancer typically a Kubernetes resources in AKS cluster. By introducing Application gateway, we are not consuming some of the node's resources such as CPU, memory, and network bandwidth. Importantly, WAF can be introduced to scan incoming traffic to prevent attacks. In addition, it is possible to implement SSL off-load and end to end TLS encryption with Application Gateway. This is achieved via configuring application gateway with end-to-end TLS communication mode. Application Gateway will terminate the TLS sessions at the gateway and decrypt user traffic before initiating a new TLS connection to the backend server, re-encrypting data using the backend server's public key certificate before transmitting to the backend. Responses go through the reverse process back to the call initiator.

The below picture from Microsoft illustrates this flow: Use Traffic Manager to support multi-region deployment for DR

For disaster recovery (DR) protection from Azure regional outage, it is always recommended to plan carefully and deploy critical production systems into multiple regions and implement a global service such as Traffic Manager to support rapid failover in the event of disaster. Plan to deploy Production AKS clusters in second Azure Region.  There is no inbuilt direct synchronisation for AKS clusters deployed in separate regions.  As part of application deployment, we must ensure both AKS clusters receive the latest code.

With Traffic Manager, we can configure the routing options to support Active/Active or Active/Passive clusters,  a single public endpoint is exposed and accessible to our users via the internet as a DNS. 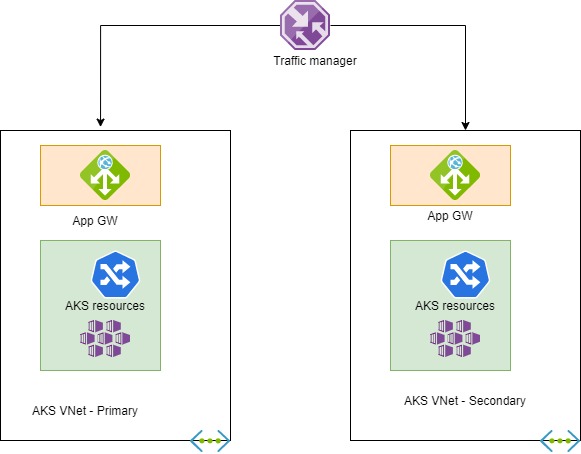 This is another great update from Azure as of May 2020. AKS is a free container service that simplifies deployment, operations and management of Kubernetes as a fully managed orchestrator service. You pay for the resource consumption (compute, storage etc) of the cluster’s nodes, there is no charge for the cluster management. The optional uptime SLA is a financially backed service level agreement (SLA) that guarantees an uptime of 99.95% for the Kubernetes API server for clusters that use Azure Availability Zones and 99.9% for clusters that do not use Azure Availability Zone.

To summarise the difference:

I hope this article gives you some best recommendations for AKS cluster deployment.