I recently implemented an AWS site-to-site VPN for a customer to connect their on-premise network to their newly deployed AWS account.

The requirement was network level connectivity from their on-premise network to their management VPC. Support of production VPC resources would be carried out from bastion hosts in the management VPC.

The setup of this was simple from an AWS perspective. With Cloud Formation we deployed a Customer Gateway (CGW) using the IP address of their on-premise firewall, created a Virtual Private Gateway (VPG) and then the VPN Gateway (VPN). The on-premise configuration took a bit of research to get right but once configured correctly it worked as expected.

However, after deployment it was determined that an on-premise server needed to connect to a Production VPC resource.

For a more detailed explanation of this see; https://docs.aws.amazon.com/vpc/latest/peering/invalid-peering-configurations.html

The solutions considered to allow access from on-premise to the production VPC resource were;

The customer wasn’t keen on adding VPN connections, as it would add configuration and complexity to the on-premise firewall, and we weren’t confident that an application proxy would work, so we decided on the new Transit Gateway service. 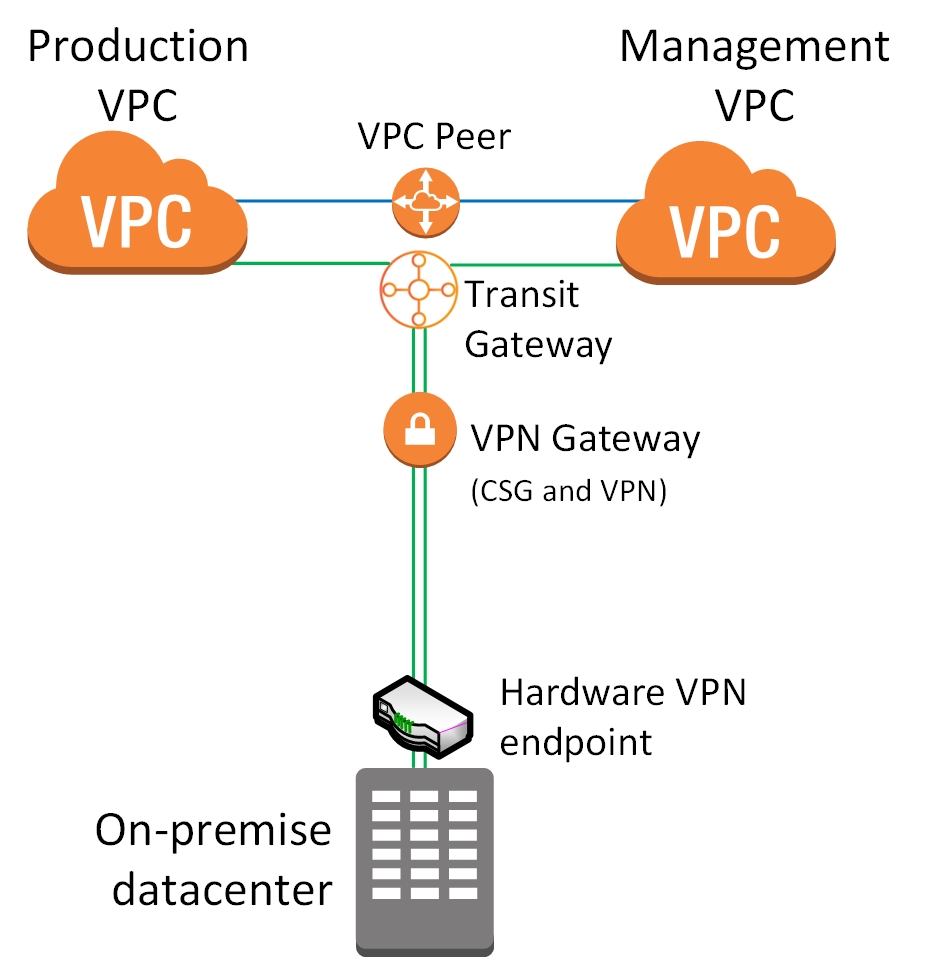 The steps to implement this were fairly simple, however Cloud Formation doesn’t cover all of the steps;

This Cloud Formation template assumes that two VPCs already exist, and each have one subnet.
The VPC and subnet Ids need to be entered into the parameters section. The on-premise VPN endpoint is setup after the AWS VPN setup, but the IP address is added to the VPNAddress parameter. This also assumes a non BGP on-premise endpoint.

After the Cloud Formation stack is deployed, the ‘Outputs’ section will list the CustomerGatewayId and TransitGatewayId, these are needed in the next steps.

Create the site to site VPN

The attached VPCs have had routes added by default, but as we are using non-BGP on-premise endpoint, the VPN needs routes specifically added.

In our case we are leaving VPC-VPC traffic to use the VPC peer, and only adding an on-premise network to the subnet routes.

Get the Transit Gateway Id from the Cloud Formation template output, and get the route VPC subnet’s route table Id;

Using a Transit Gateway can make site-to-site VPNs simpler and less messy by allowing a single VPN connection to AWS that can reach more than one VPC.

One important limitation is that Transit Gateway doesn’t yet support security groups.

This implies that it will be supported in the future, but for now resource access between VPCs using security groups must remain over VPC Peer connections.