{"date":1483189200000,"image":"/content/dam/shared-component-assets/telstra-purple/blog/Telstra-Purple-default-OG-3.jpg","path":"https://purple.telstra.com/blog/is-azure-functions-over-web-api-beneficial","description":"Whenever I meet clients and give a talk about Azure Functions, they are immediately interested in replacing their existing Web API features with Azure Functions. ","category":"Software Development","title":"Is Azure Functions over Web API Beneficial?","tags":["API"]}

Whenever I meet clients and give a talk about Azure Functions, they are immediately interested in replacing their existing Web API features with Azure Functions. In this post, I’d like to discuss:

It would be a good idea to have a read through this article, Serverless Architectures, before starting.

One of the characteristics of Serverless Architecture is “event-driven”. In other words, all functions written in Azure Functions are triggered by events. Those events, of course, include HTTP requests. From this HTTP request point of view, both HTTP trigger function and Web API action work exactly the same way. Let’s compare both codes to each other:

How do both look like? They look pretty similar to each other. Both take an HTTP request, process it and return a response. Therefore, with minor modification, it seems that Web API can be easily migrated to Azure Functions.

However, life is not easy. There are some major differences we should know before migration:

Within the HTTP request/response pipeline, a Web API controller internally creates an HttpContext instance to handle data like headers, cookies, sessions, querystrings and request body (of course querystrings and request body can be handled in a different way). The HttpContext instance works as an internal property so any action can directly access it. As a result, each action only passes necessary details as its parameters.

On the other hand, each function takes a different HTTP request/response pipeline from Web API, which passes the HttpRequestMessage instance to the function as a parameter. The HttpRequestMessage instance only handles headers, querystrings and request body. It doesn’t look after cookies or sessions. This is the huge difference between Web API and Azure Functions in terms of stateless.

In Web API, we put some decorators like HttpGet, HttpPost, HttpPut, HttpPatch and HttpDelete on each action to declare which HTTP verbs take which action, by combining with the Route decorator.

On the other hand, each function has a definition of HTTP verbs and routes on function.json. With this definition, different functions having the same route URI can handle requests based on HTTP verbs. 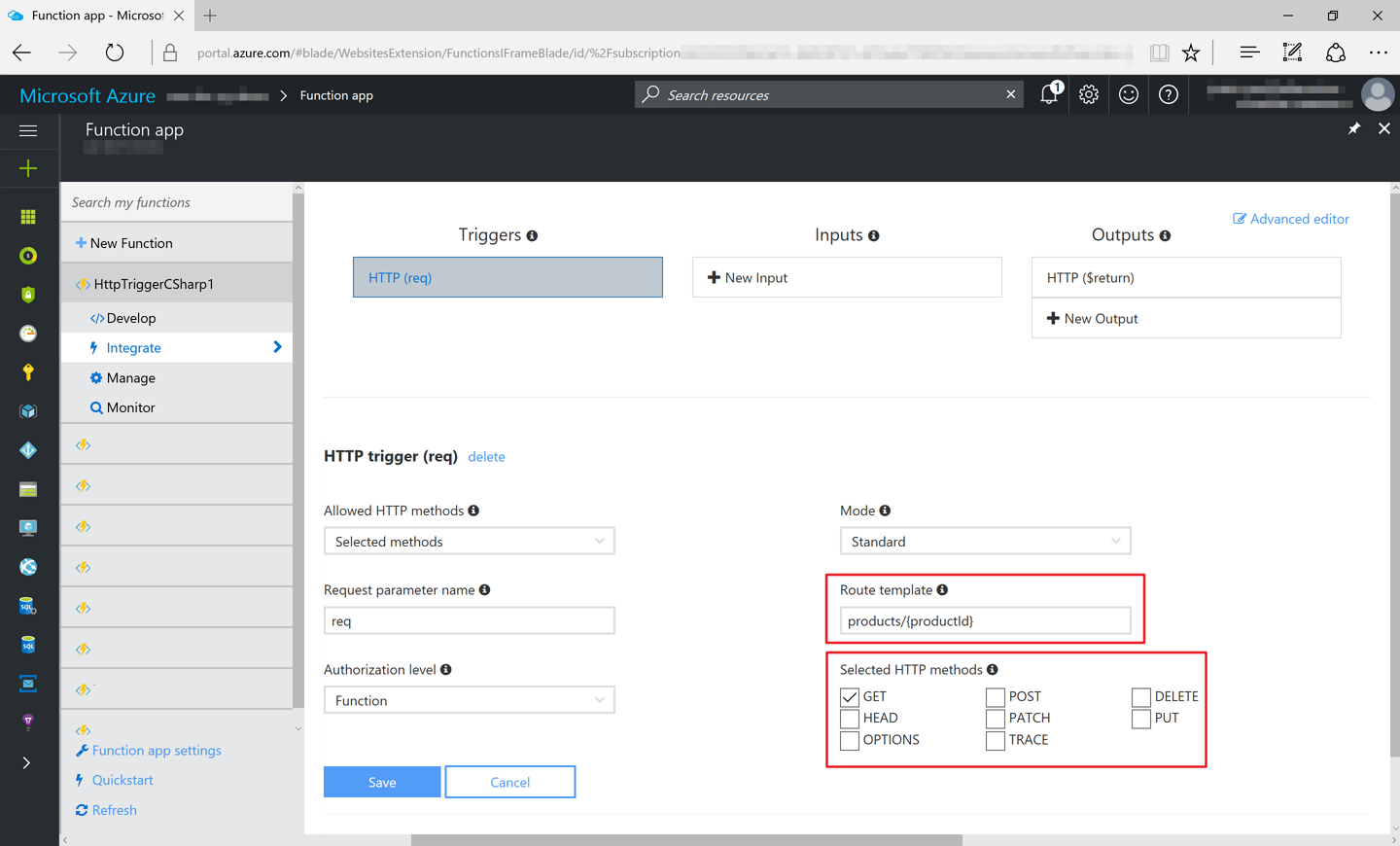 Other than the host part of URI, eg) https://api.myservice.com, the base URI is usually defined on the controller level of Web API by adding the Route decorator. This is dead simple.

However, as there’s no controller on Azure Functions, it is defined in host.json. Default value is api, but we can remove or redefine to others by modifying host.json.

While function.json can be managed at the function level through GUI or editor, unfortunately it’s not possible to edit host.json directly in the function app. There’s a workaround using Azure App Service Editor to modify host.json, by the way.

There are many good IoC container libraries for Web API to manage dependencies. However, we have already discussed this in my previous post, Managing Dependencies in Azure Functions, that Service Locator Pattern should be considered for DI in Azure Functions and actually this is the only way to deal with dependencies for now. This is because every Azure Function has the static modifier which prevents us from using the same way as the one in Web API.

We know different opinions against service locator patterns for Azure Functions exist out there, but this is beyond our topic, so we will discuss it later in another post.

To sum up, unless your Web API requires a significant amount of refactoring or written in ASP.NET Core, it surely is worth considering migration to Azure Functions. It is much easier to use and cost-effective solution for your Web API.