As organisations build more custom and tailored solutions to solve their most complex business problems, the scalability of supporting platforms and systems are always tested. Unfortunately, when it comes to Azure DevOps, they are tested in ways that contradict best practices and the correct way to scale an organisation. This article will hopefully bring some light into how, with the MLOps methodology, you can scale an Azure DevOps organisation effectively without causing significant double up!

What is Azure DevOps best practice for scaling?

First, let’s talk about the repeated problem in the IT industry. It’s common, almost folklore, that when a new IT development team starts a new initiative or program of work, they go to their Azure DevOps organisation and click the big giant “New Project” button. That is a no-no! As Microsoft Docs best practice suggests, the best way to scale an organisation is to consider projects in Azure DevOps as Business Units to your organisation. What does that mean exactly? Well, a business unit could be your entire IT division, or an essential function like Machine Learning, all in one project! From that one project, you then split it up with multiple teams to the various vertical and horizontal pieces of work they are tasked with.

The one project per business unit approach comes with several benefits. These include:

Here are a couple of screenshots of a good and bad Azure DevOps organisation set up. First is a bad example organisation, with lots of small projects for niche things but no real consistency of what and who should have access to them. 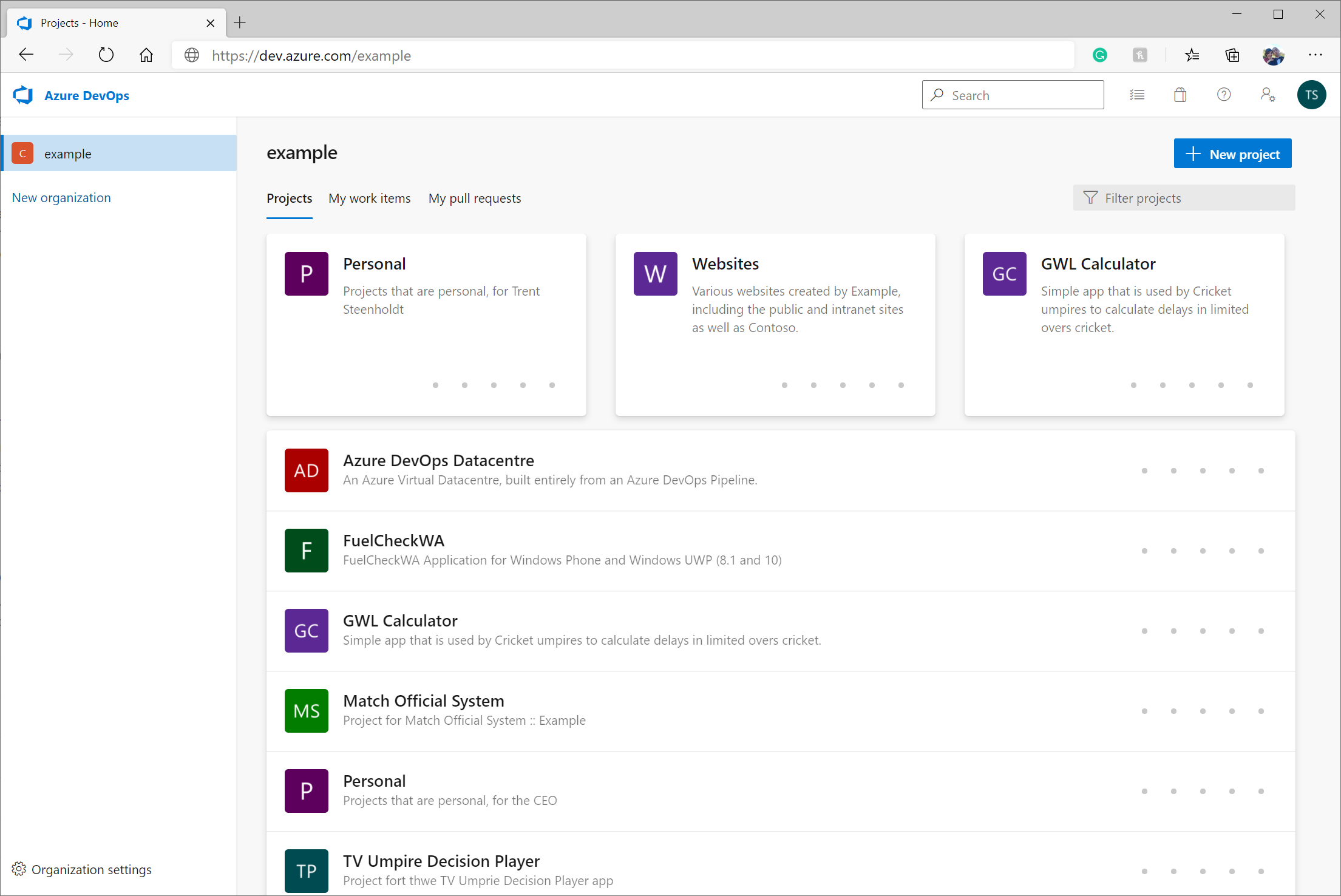 Then here is a good example organisation, where they have used business units. The CIO of the IT division can get a visualisation of all things happening in IT by going into their project, and each team within that has their own board, repositories and so on. Then with the Finance System project, the CFO has the same level of visibility into the various teams managing it. 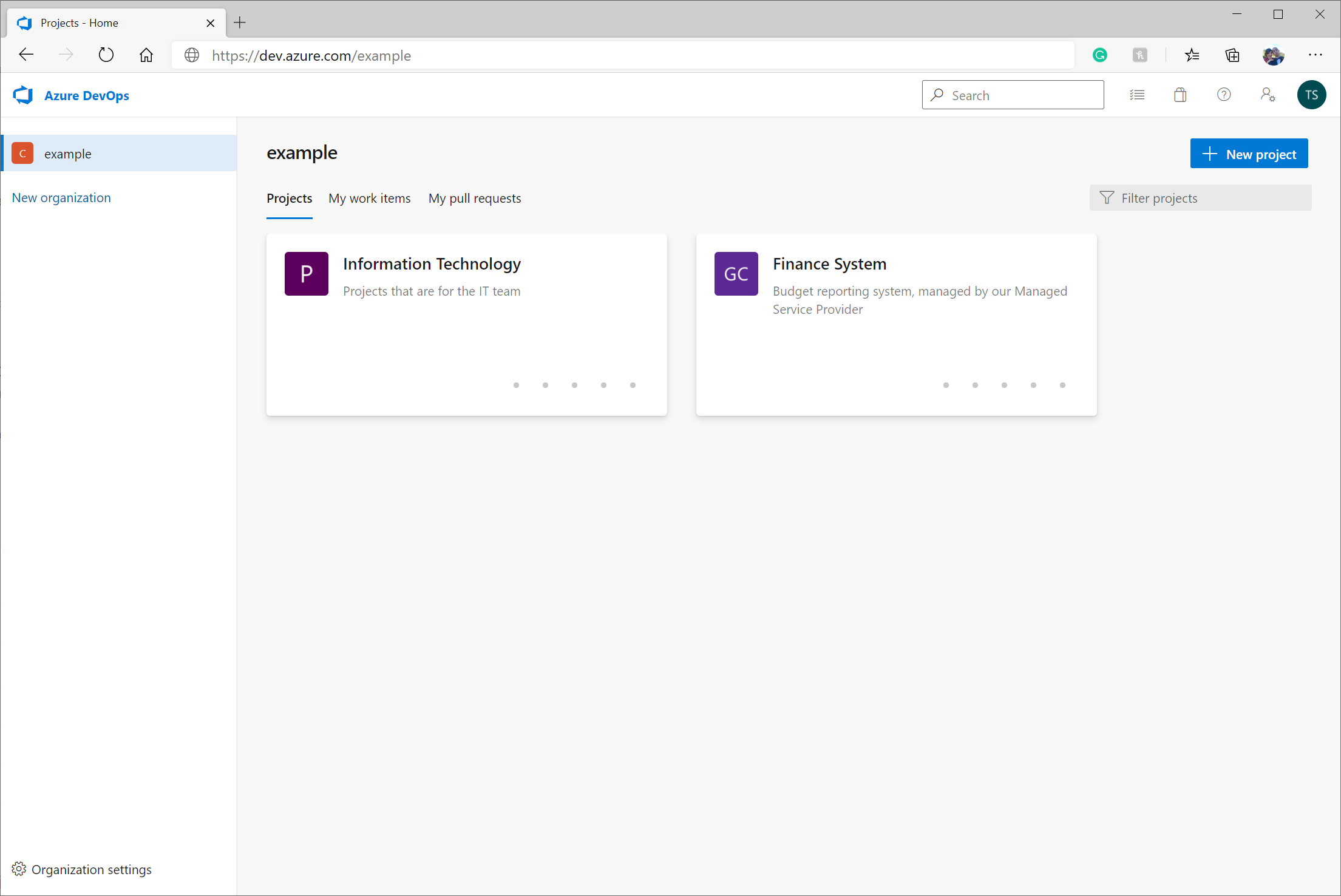 Taking best practice and applying it to MLOps

Now with that understanding of the best practice, let’s think about how that works in MLOps. MLOps is defined as the collaboration between data scientists and operation professionals. These two teams play very distinct roles in making MLOps happen, and sometimes it can be complicated with multiple data scientists teams working with the single group of operation professionals. So, how do we scale this without giving data scientists access to say production deployment pipelines but still have the ability to collaborate?

The best way to manage this is to have multiple teams for each group of the MLOps makeup and then use custom role-based access controls (RBAC) in an Azure DevOps Project. A custom RBAC solution would then limit data scientist teams from controlling pipelines, repositories or other artefacts they shouldn’t need to touch.

Let’s hypothetically have two separate data scientist teams, building their own unique models with just the one centralised operations team, as shown in this diagram below.

To get them collaborating in a highly governed manner, the first thing to do is to create them all a team inside the same Azure DevOps Project. When you are creating your teams, consider the following: 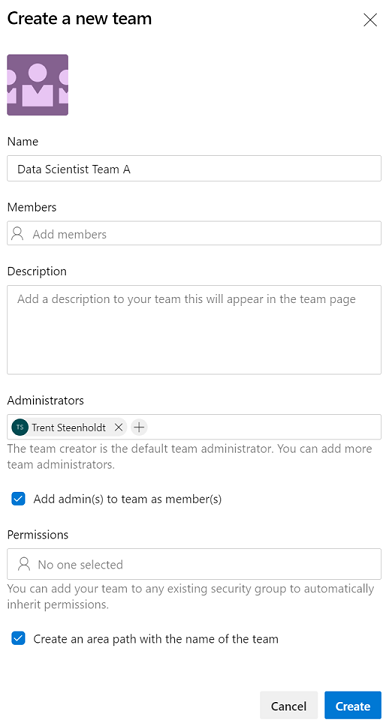 With your teams created, now create the supporting artefacts in Azure DevOps they’ll use. That’s things like repositories, pipelines and service connections. I recommend keeping these artefacts at a 1:1 ratio with a team as it allows for better governance with the custom RBAC model, but nothing is stopping you from creating more than one for a team.

With all these artefacts created, you now need to grant the data scientist teams explicit permission to these artefacts. By default, without any permission, these teams have no access to any of the artefacts you’ve just created. The centralised Ops team do because they are Contributors, but that’s a good thing as their job will be to make sure governance is kept up not only in the ML environments but in Azure DevOps too.

To make the data scientist teams have just enough permission to build out and train models (continuous integration/ continuous testing), complete the following for each of them: 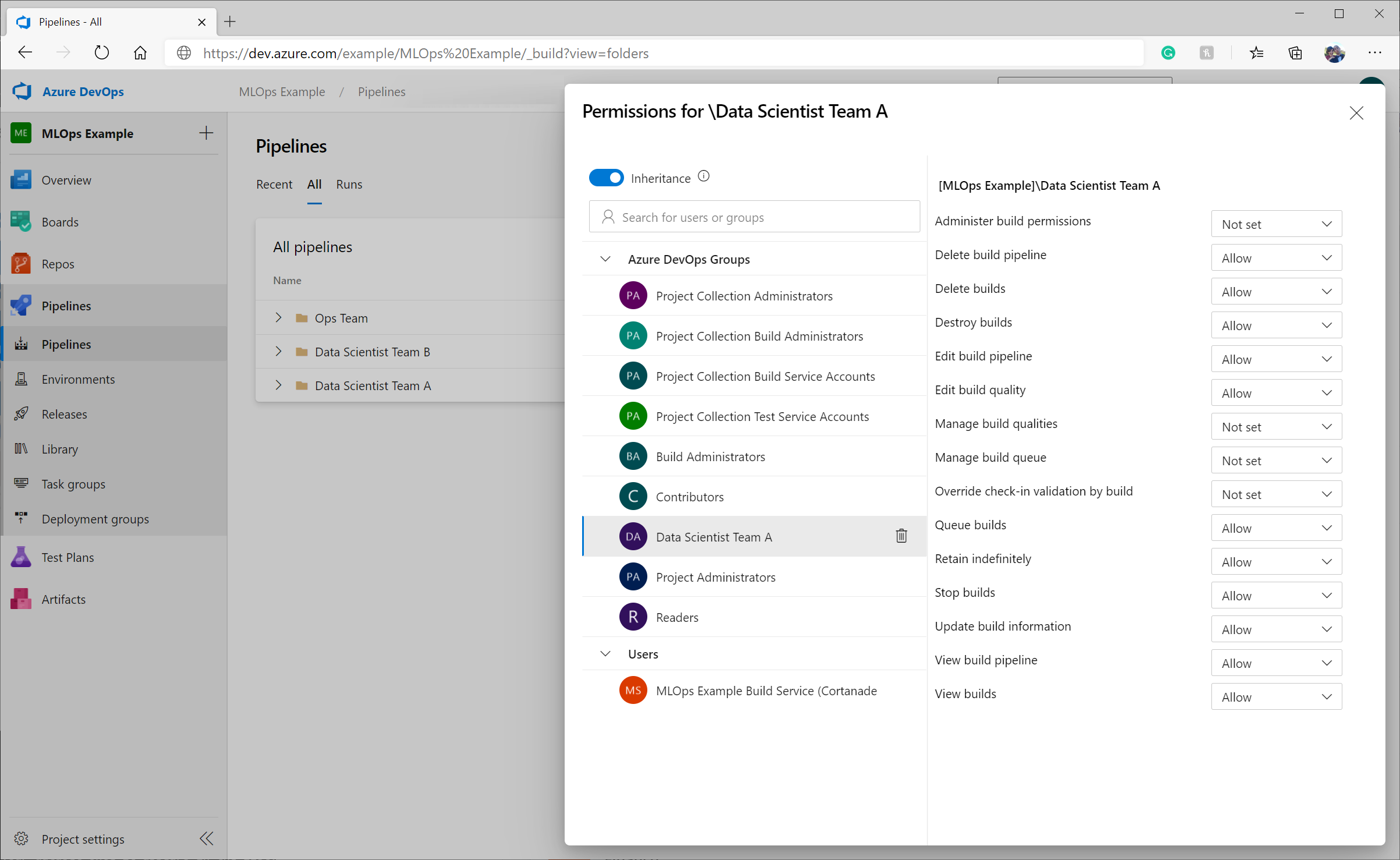 Once you have done this for each data scientist team, you have set up a custom RBAC model in your Azure DevOps Project, as shown in the diagram below.

I hope this blog article helps illustrate that you can, and should, have just one Azure DevOps Project for the MLOps methodology and the business unit function that it is. Doing so brings so many benefits, and I guarantee, that over time with several machine learning model deployments, getting design consistency with something over multiple projects would be a nightmare. It would also make tracking change volumes, success/failure rates and deployment times harder too, something your C-Level executives won’t like when they need to validate their MLOps return on investment and total cost ownership!